A table representing farm statistics in Orange County, Florida, during 1904. Statistics in the table identify various products produced in the county, how many acres each crop occupied, production number of each crop, and the dollar value of each crop. The U.S. Census of Agriculture identified upland and Sea Island cotton, corn, sweet potatoes, rice, sugarcane and syrup, peas, and native grass and natal grass hay as field crops.

Mosquito County, a massive county south of St. Johns County that consisted of much of Central Florida, was established in 1824. In 1845, Mosquito County was renamed Orange County when Florida earned statehood. This new county included present-day Osceola, Seminole, Lake, and Volusia counties. Orange County was named so for the area's major fruit crop: oranges. The area was devastated by a freeze during the winter of 1895-1896, which allowed for subsequent land speculators to initiate a land boom in Florida, with Orlando becoming a "boom town." Seminole County separated from Orange on April 25, 1913 and was named for the Seminole tribes that originally inhabited the area. In the early-1900s, Seminole County was known for its agricultural development and close proximity to shipping lanes. By the 1920s, citizens in Seminole County, particularly in Sanford, soon shifted their interests in making the area a tourist destination. 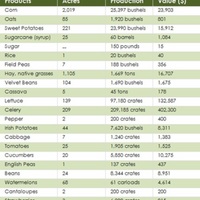