A letter from A. W. Macfarlane to Henry Shelton Sanford dated August 27, 1884. Macfarlane was the secretary for the Florida Land and Colonization Company from 1884 until its dissolution in 1892. Presumably, he worked in the company's main office, located at 13 Austin Friars in the business district of London, United Kingdom. In this letter, Macfarlane discussed several possibilities for the usage of company profits earned during the fiscal year ending on June 30, 1884. Macfarlane suggested either directing half of the profits to the reduction of company property values but with no distribution of dividends, or directing a quarter of profits to the reduction of property values, with shareholders receiving a 5% dividend for the year. 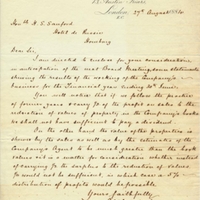