Letter from A. W. Macfarlane to Henry Shelton Sanford (December 9, 1886)

Letter from A. W. Macfarlane to Henry Shelton Sanford (December 9, 1886)

Letter from Macfarlane to Sanford (December 9, 1886)

A letter from A. W. Macfarlane to Henry Shelton Sanford dated December 9, 1886. Macfarlane was the secretary for the Florida Land and Colonization Company (FLCC) from 1884 until its dissolution in 1892. Presumably, he worked in the company's main office, located at 13 Austin Friars in the business district of London, United Kingdom. In this letter, Macfarlane acknowledged confirmation of an earlier telegram he sent to Henry Sanford. According to Macfarlane, the earlier telegram noted that William Beardall, the FLCC's local agent based in Sanford, Florida, was offered $40,000 for 2,600 acres and a township in Polk County. 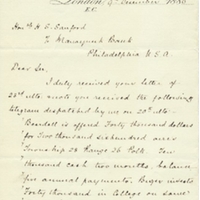