Letter from Trafford to Sanford (February 1, 1884)

A letter from E. R. Trafford to Henry Shelton Sanford (1823-1891), dated February 16, 1884. In the letter, Trafford provided Sanford with updates about Sanford, Florida. He notes that the signed deeds for Helen M. Randall and Gustaf Lundquist had been received. He also wrote that "the mill is now in full blast," indicating that 60,000 feet of logs just received from the railroad, the first raft of 70,000 feet will arrive from down the river tonight. Trafford concluded the letter optimistically noting that "everything improving [sic]." 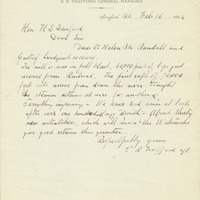