Celery Growing, City of Jacksonville Steamboat in the Background

Celery Growing, City of Jacksonville Steamboat in the Background

Postcard of a celery farm along the riverfront with the City of Jacksonville steamboat in the background. The origins of Sanford's connection to celery farming began on December 26, 1894, when a freeze damaged the area's citrus groves. They began to recover during a warm and wet January which promoted new shoots, but a second freeze hit on February 7, 1895, practically wiping them out. The 24 degree temperature was the coldest known in Florida to that point. The freeze was so intense that the sap froze inside the trunks, many of which split open, sounding like gunshots, and crashed to the ground. The population quickly dropped from 5000 to 2000 as the groves were abandoned. I.H. Terwilliger stayed after the freezes and is believed to have planted the first celery grown in Sanford in 1896. J.N. Whitner and B.F. Whitner Sr. planted 3/4 acre in 1897 with celery imported from Kalamazoo, Michigan. Chase & Company also converted to celery cultivation and by 1898, celery became the crop synonymous to Sanford.

Copyright to this resource is held by the State Library and Archives of Florida and is provided here by RICHES of Central Florida for educational purposes only.

"Sanford: a Brief History"
A Chronology of the Development of the City of Sanford, Florida: With Major Emphasis on Early Growth
"Sydney Chase Sr. (1860-1941)"
Steamboats in the Hyacinths
"Steamboats"
When Steamboats Reigned in Florida 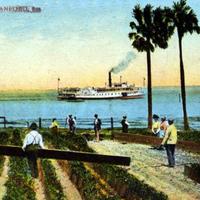