Color photograph of the band, The Tempests, performing live at Surfer's Club in 1966. Surfer's Club was a teenage nightclub in the 1960s, located at 14966 Gulf Boulevard, in Madeira Beach, Florida. The club, which opened in July 1964 and closed in October 1966, only allowed kids ages 15-20. Nightly chaperones ensured there was no "front to back" dancing. The photograph, from left to right, features Doug Palmer, Charlie Bailey, and Tommy Angarano, as well as nine teenagers dancing in front of the stage. 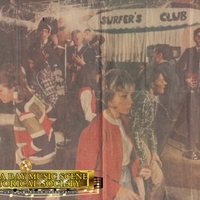