A record cover for The Soul Trippers, originally called The Outsiders, sometime between 1966 and 1967. Photographed, from left to right, is rhythm guitarist Ronnie Vaskovsky, drummer Spencer Hinkle, lead guitarist Buddy Richardson, bassist Ronnie Elliot, and singer John DeLise. According to the record, the band recorded with Laurie Records, located at 35 West 4th Street in New York City, New York, and was managed by Briarwood Enterprises, based in St. Petersburg and Tampa.

The Outsiders formed in Tampa, Florida, in 1964, consisting of Hardy Dial on vocals, Buddy Richardson and Ronnie Vaskovsky on guitar, Ronnie Elliot on bass guitar, and Spencer Hinkle on drums. They recorded their debut single, "She's Coming On Stronger," for the Tampa record label, Knight, in late 1965. Dial was replaced on vocals by John DeLise and the band recorded its second single, a cover of Eddie Cochran's "Summertime Blues," in the spring of 1966. The record was a regional success and the band was picked up by the Laurie Records subsidiary Providence, which convinced them to change their name to The Soul Trippers, in order to avoid conflict with several bands that had the same name. In July 1966, they recorded a garage rock version of James Moore's "I'm a King Bee," which sold 20,000 copies. When radio station managers discovered the band was white, they pulled the record from their playlists, and the group departed ways shortly thereafter. Buddy Richardson later formed White Witch and John DeLise went on to play in The Rovin' Flames.

Copyright to this resource is held by the Tampa Bay Music Scene Historical Society and is provided here by RICHES of Central Florida for educational purposes only. 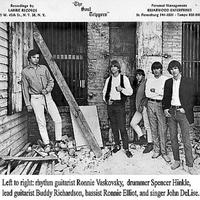