A newspaper article published in The Tampa Tribune on September 1, 1966, describing an interview with The Rovin' Flames. The article was written by Rose Marie Almas and Cherie Wallace. In the upper right corner is a photograph of the band standing on a truck. Photographed from left to right is Paul Battle, Hardy Dial, J. R. Maietta (seated), Jim Morris, and Jerry Goff.

Copyright to this resource is held by Tampa Bay Music Scene Historical Society and Tampa Tribune and is provided here by RICHES of Central Florida for educational purposes only. 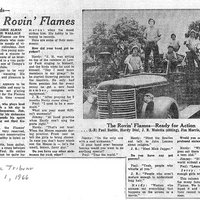