Indian River Lagoon, an acrylic painting created by Dr. Walter Gaudnek in 1974. Indian River Lagoon depicts a spacecraft in outer space, with the Sun and Saturn in the background. Born in Fleyh, Czechoslovakia, in 1931, pop artist Dr. Gaudnek is known for his blend of his bold colors, philosophy, religious symbolism, labyrinth installations, and mixtures of performance and art. He also draws heavy inspiration from Bohemia, Caravaggio, Kazimir Malevich, and Pablo Picasso. A 1957 Fulbright Scholar who received his doctorate from New York University, he joined the art faculty of the Florida Technological University (present-day University of Central Florida) in Orlando, Florida, in 1970. Dr. Gaudnek previously taught at universities in Los Angeles, New York, and Ohio. He founded the Long Island University's Hillwood Art Museum in Greenvale, New York. His honors from UCF include Distinguished Researcher of the Year (1990), the Teaching Incentive Program Award (1995 and 2005), the Professional Excellence Program Award (1997), the President’s Award (1999), and the Research Incentive Award (2002). In 1994, the Sudetendeutecher Landsmannschaft, an organization dedicated to recognizing the achievements of the Czech-German diaspora, awarded him the Kulturpreis for Fine Art and Architecture. 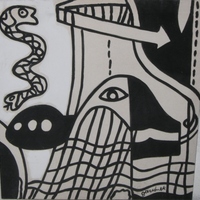