Skylab 3's Science Pilot Owen K. Garriott (1930-) with his family. To his left are Richard Allen Garriott (1961-), Helen Mary Walker Garriott, and Linda S. Garriott (1966-). The two sons on the end are Randall O. Garriott (1955-) and Robert K. Garriott (1956-), but it is not clear which is which. Both Robert and Richard (now known as Richard Garriott de Cayeux) became important figures in the video game industry.

As Project Apollo was winding down and the final three missions (Apollo 18, Apollo 19, and Apollo 20) were canceled, the National Aeronautics and Space Administration (NASA) looked for ways to repurpose launch vehicles and other equipment. Out of this, Skylab and three space science missions were born. Skylab was conceived by famed rocket designer, Wernher von Braun (1912-1977), to use an unused upper-stage fuel tank and convert it to an orbital laboratory. This was necessitated by NASA's budget being slashed. With the tank becoming the basis of the space station, NASA added solar arrays, a docking adapter, and a space observatory. The Skylab missions were constituted of one mission to put the station in space (Skylab 1), using a modified and last Saturn V to launch, and three crewed missions (Skylab 2, Skylab 3, and Skylab 4) to occupy the lab and perform science, using the smaller Saturn IB booster to launch the three astronaut crews. When launched on May 14, 1973, the station encountered problems immediately. A micrometeoroid shield prematurely deployed and tore off one of the two main solar arrays. NASA engineers went to work and were able to save Skylab and the three crewed missions. Each of the subsequent missions set what were then endurance records for living in space and conducted substantial space science experiments. NASA tried to keep Skylab in orbit after Skylab 4 (SL-4) and until the Space Shuttle could boast its orbit, but with a decaying orbit, it crashed on July 11, 1979. Skylab 3 (SL-3) was launched from Launch Complex 39B, using what was jokingly referred to as a "milk stool" to adapt the launcher to the smaller Saturn IB booster. SL-3's crew consisted of Mission Commander Alan Bean (1932-), Command Module Pilot Jack R. Lousma (1936-), and Garriott. 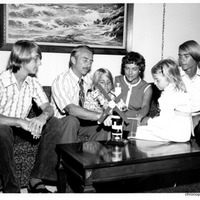