A postcard depicting the crypt of the Chapel of King Louis XVI of France, also known as the Chapelle Expiatoire, in Paris, Île-de-France, France. The chapel was erected in 1814 on the interment site of Louis XVI, also known as Louis Capet, and his wife, Queen Marie Antoinette, after their remains were moved to Saint-Denis. The postcard shows the black and white marble altar that was built on the site where Louis XVI and Marie Antoinette's remains were found. 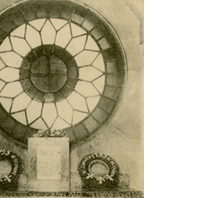