A postcard depicting a boat travelling past Urquhart Castle, once one of Scotland's largest castles. Located on a promontory on the banks of the Loch Ness, the castle offers beautiful vistas up and down the lake. It was a medieval fortress for 500 years, and was particularly important from the 1200s to the 1600s, as it featured in the Scots' struggle for independence. It was under the control of King of Scots, Robert I, also known as Robert the Bruce, , beginning in 1306. 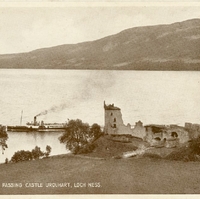