Interior of the Chapel of Louis XVI Postcard

Interior of the Chapel of Louis XVI Postcard

A postcard depicting the interior of the Chapel of King Louis XVI of France, also known as the Chapelle Expiatoire, in Paris, Île-de-France, France. The chapel was erected in 1814 on the interment site of Louis XVI, also known as Louis Capet, and Queen Marie Antoinette, baptised Maria Antonia Josepha Johanna, after their remains were moved to Saint-Denis. The exterior of the chapel, once surrounded by cypress trees, was converted into a public garden, which the postcard shows, in 1862. 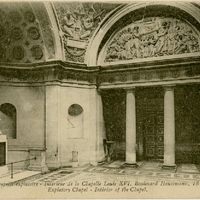