A postcard depicting six varieties of sponges, pictured from left to right: wire sponges, wool sponges (also called wool sea sponges), silk sponges, finger sponges (also known as Iotrochota birotulata or green finger sponges), grass sponges (vase sponges), and yellow sponges. This postcard was part of a series of postcards depicting scenes in Tarpon Springs, Florida. Sponge harvesting in Tarpon Springs began in 1852 when Walter Lowe sailed to Anclote Key to secure cargo containing sponges. The Anclote and Rock Island Sponge Company was formed by John Cheyney in 1891, with offices in Tarpon Springs and Philadelphia, Pennsylvania. Cheyney also founded the Tarpon Springs Sponge Exchange, along with Ernest R. Meres, in 1907. Despite the Florida land bust of the 1920s and the Great Depression, the sponge industry continued to thrive until 1938, when a blight infested the sponge beds. Instead, the city turned to tourism, capitalizing on its rich Greek culture. 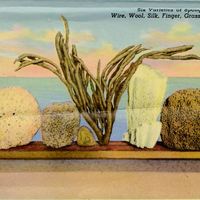