A French newspaper article about Lieutenant Dean N. Post, Jr. (1921-1944), who was killed in action in France during World War II. The article talks about the plane crash that Andre Clair witnessed as a boy, as well as the French citizens' act of defiance to protest Post's death,

Lt. Post was a pilot from Tampa, Florida, who served in the U.S. Army with the 357th Fighter Group of the 264th Fighter Squadron. His airplane crashed in Martimpré, on May 27, 1944, and he was executed by German authorities after being hidden by French citizens in Gérardmer. Lt. Post is buried at Epinal American Cemetery and Memorial in Dinozé, France.

Copyright to this resource is provided here by RICHES of Central Florida for educational purposes only.

On May 27, 1994 at 11:45, in the sky of Hautes-Vosges, combat engages in air between German and Anglo-American fighter aircrafts. This story is recounted today by André Clair who remembered that awful day: << It was a beautiful day, the children of the City Nathan Levy, play on the sidewalk of Kelsh Boulevard. Suddenly, just above, very close to the ground, many fighter planes tear the silence >>. Never were there so many planes appeared in such tight rows. The fight lasts more than an hour. We saw seven aircrafts downward and fallen in flames. The first lieutenant Post Dean managed to parachute from his plane in flames. Injured, he landed in Thalet, a town in Valtin. According to the Military History Club of Remiremont, he was treated in a house in the country, and then taken by the Germans in Gerardmer. On the 29th of May, after being interrogated at the Hotel de la Poste; he was escorted by foot, led by a sergeant, Chief Feldgendarmerie of Saint Dié, to the prison of the "Goering-Kasern" (current Kléber neighborhood). In the middle of the path on the road between the Grand’Rue and the gate of the barracks, just in front of this portal and some Géromois, the helper killed the pilot prisoner with a shot of a pistol to his back. The departmental archives specify time: 14h, and the name of Feldgendarme: Major Hiss, head of department in Saint-Dié. On May 30, the body of the American pilot, Dean Post, was handed over to French authorities and civil burial took place at the communal cemetery, German authorities have forbidden any procession and only ten people could follow the hearse. The crowd congregated in the vicinity of the tomb and despite monitoring Feldgendarmerie, many flowers are laid on the coffin. The Feldgendarmerie gave the order to all move from the grave. The tomb of the aviator was covered overnight with an impressive layer of flowers, removed by the Germans in the morning, but restarted the following night. After the war, the body of Post Dean rejoined the American cemetery of Quequement in the aisle B28-30. Today, based on the locations of the fallen aircrafts, we can collect these stones, in Clefcy, the Evelines at Martimpré. 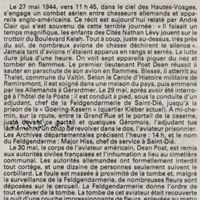