The Florida Power and Light Company's Power at Combined Efficiency (PACE) 520, which consists of two mirror-image PACE 260 plants, in Palatka, Florida. The plant was installed in 1976. PACE combined-cycle plants are comprised of two Westinghouse 501 (W501) gas turbines and a 100 MW Westinghouse steam turbine. 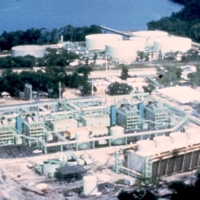