Black and white photographs of the front of Sanford Municipal Athletic Field and of the infield and bleachers . Located less than a mile from Historic Downtown Sanford, Sanford Memorial Stadium now stands next to the original site, which was built in 1926. Many Major League stars have played in the stadium including Babe Ruth, Jackie Robinson, Willie Mays, Tim Raines, and David Eckstein.

Sanford Stadium is the location where Jackie Robinson first took to the field in 1946 to play baseball as a member of a white Class AAA International League Team in Daytona Beach, Florida, which was partnered with the Montreal Royals. By the time Robinson took the field, however, the crowd ended up booing him off before he could play. The police chief had actually threatened to cancel the game if Robinson took the field.

Copyright to this resource is held by the Florida Historical Society and is provided here by RICHES of Central Florida for educational purposes only. 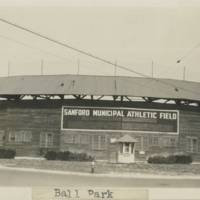 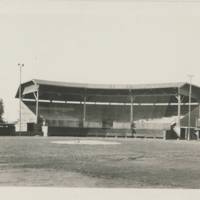