One notable member of the crew was Florida native Staff Sergeant Thomas E. Eason (1922-1945), who served for over three years in the U.S. Army Air Forces' (USAAF) as a waist gunner on a Boeing B-17 Flying Fortress nicknamed "Sweet and Lovely" and "Princess Pat." SSgt. Eason completed 28 missions in both the Pacific and European Theaters of World War II. On January 20, 1945, he was killed near Altenheim, France, after his airplane was shot down by enemy combatants. Over the course of his service, SSgt. was awarded the Distinguished Flying Cross with two Oak Leaf Clusters.

Copyright to this resource is held by Richard E. Drain and is provided here by RICHES of Central Florida for educational purposes only. 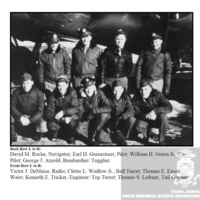