A letter from U.S. Department of War Brigadier General G. A. Horkan to Edna P. Hancock. In the letter, BG Horkan encloses a photograph, which is not included in this digital reproduction, of Epinal American Cemetery and Memorial in Dinozé, France. According to the letter, Hancock's husband, Sergeant John B. Hancock (1913-1944), would be buried at Epinal. Although the letter is dated April 14, 1947, it was likely sent in 1945.

Originally created by G. A. Horkan. 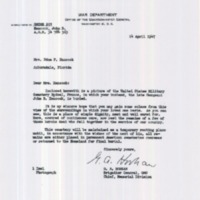