French Algerian currency issued in 1942, during World War II. The French Franc (Fr) was the currency used in France and its colonies until the Euro was adopted in 2002. This particular bill was issued by the Banque de L'Algérie, indicating that it originated in Algeria, which was a French colony until 1962. This bill was also likely used by Sergeant John B. Hancock (1913-1944), an American soldier. 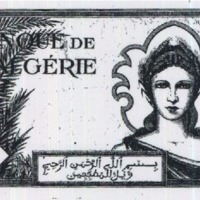