The insignia for the U.S. Army's 45th Infantry Division. The original insignia was approved in August of 1924 and featured a swastika, which was a symbol commonly used by Native Americans from the Mississippian culture. With the rise of Germany's Nazi Party, which also used a swastika, the 45th Division retired its original insignia and replaced it in 1939 with another Native American symbol called the Thunderbird.

A notable member of the 45th Infantry Division during World War II. Sergeant John B. Hancock (1913-1944) was born in Thomasville, Georgia, in 1913, but later migrated to Auburndale, Florida. Hancock managed a Great Atlantic &
Pacific Tea Company (A&
P) store in Haines City until he enlisted in the 45th Infantry Division's 179th Infantry Regiment. Sgt. Hancock served initially in Africa in 1943, until the 45th Infantry Division's participation in the Allied invasion of Sicily, codenamed Operation Husky. The division then went on to participate in the Allied invasion of Italy, where Sgt. Hancock was injured. He was returned to duty in February of 1944 in southern France. On November 1, 1944, Sgt. Hancock went Missing in Action (MIA) after serving in the Allied invasion of Southern France, codenamed Operation Dragoon. He was eventually buried at Epinal American Cemetery and Memorial in Dinozé, France. 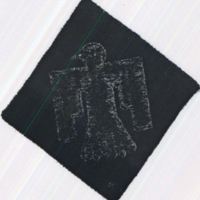