Report of Changes of U.S.S. Logan

Report of Changes of U.S.S. Logan

The Report of Changes listing the Navy personnel on the USS Logan on November 26, 1944. The current location saw the personnel at the United States Receiving Station, United States Naval Training and Distribution Center (TADCEN) at Camp Elliott in San Diego, California. The form includes the names and ranks of the personnel.

A notable person listed on the muster roll is Lee Kenneth Brady (1926-1996). Lee was born on September 1, 1926, in Troy, North Carolina. His parents were Berrie and Melvin, a textile mill worker. He enlisted in the United States Navy on Jul 20, 1943, where he served on the USS Logan as an aviation radioman and participated in the Battle of Iwo Jima. After his service, he returned to North Carolina, and eventually moved to Florida, where he died on January 28, 1996. He is buried in the Florida National Cemetery in Bushnell.

Originally created by H.T. Settle and published by the Naval Transportation Service. 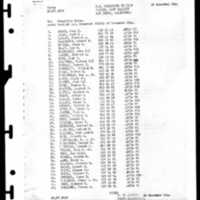