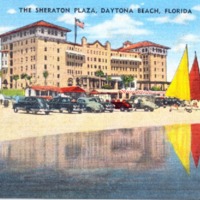 A postcard depicting the Sheraton Plaza, located at 600 North Atlantic Avenue in Daytona Beach, Florida. The building was originally constructed as a cottage for Charles Ballough in 1888. In 1895, Ballough partnered with C. C. Post to convert the… 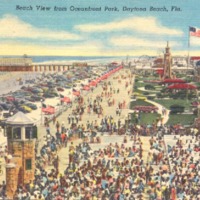 A postcard depicting the Sheraton Plaza, located at 13 South Atlantic Avenue in Daytona Beach, Florida. The park is now known as Breakers Sheraton Plaza and Environmental Learning Center. Daytona Beach was originally inhabited by the Timucua before… 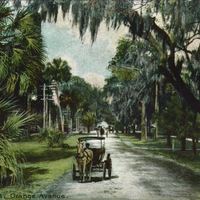 A postcard featuring a horse and buggy on Orange Avenue in Daytona, Florida, around 1910. Palm fronds, live oaks, and electric power lines line both sides of the street.In 1871, Mathias Day, Jr. (1824-1904), a migrant from Mansfield, Ohio, purchased… 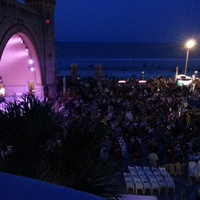 A Doobie Brothers and Santana Tribute Concert at the Daytona Beach Bandshell on August 16, August 16, 2014. Two restaurants, My Pi Pizza! and Sloppy Joe's, and a movie theater, Paragon Theaters, can also be seen in the images.Located at 70 Boardwalk… 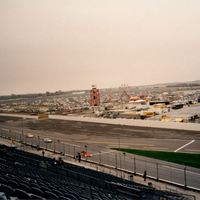 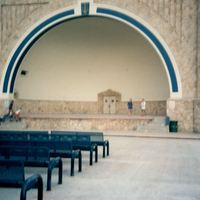 Daytona Beach was originally inhabited by the Timucua before the arrival of Spaniards in 1513. After the Timucua were virtually exterminated following contact with Europeans, the area was frequented by Seminoles from Georgia and Alabama, up until the Second Seminole War. During British occupation of Florida (1763-1783), King's Road was built, extending from St. Augustine, passing through Daytona, and ending in New Smyrna Beach. After the American Revolutionary War (1775–1783), Spain regained Florida, and, in 1804, Samuel Williams was granted 3,000 acres of land in Daytona from the Spanish Crown. Williams established a cotton, rice, and sugarcane plantation. During the Second Seminole War, Seminoles razed the plantation, while Williams' son, Samuel Hill Williams, fled.

In 1871, Mathias Day, Jr., a migrant from Mansfield, Ohio, purchased a large tract of land along the west bank of the Halifax River, which included the former Williams Plantation. With the construction of Day's hotel, today's Daytona Beach Historic District was created. In 1876, residents named the city "Daytona," in honor of Day, when the area was incorporated as a town. Growth continued in 1886 when the St. Johns & Halifax River Railway extended to Daytona.

In 1926, the towns of Daytona, Daytona Beach, Kingston, and Seabreeze merged together as Daytona Beach, in an effort led by J. B. Kahn. By this time, the beach had been nicknamed "The World's Most Famous Beach." Automobile and motorcycle races began in 1902, due to the smooth, compacted sand that covered the beach. Daytona Beach became the site of various land speed record attempts. On March 8, 1836, the first stock car race was held at the Daytona Beach Road Course, which is located in present-day Ponce Inlet. William France, Sr. and the National Association for Stock Car Auto Racing (NASCAR) established the Daytona International Speedway in 1958 to replace the beach course.