Letter from Pierre B to the National Personnel Center (May 17, 2012)

Letter from Pierre B to the National Personnel Center (May 17, 2012)

English translation of a letter written in French from Pierre B to the National Personnel Center (NPRC), asking for Harry Weber’s contact information and detailing how Weber saved Pierre and a friend from a grenade left behind by the Germans. Pierre was a boy of 9 when Harry Weber saved him from a grenade the Germans left behind in his village after the D-Day invasion. Harry Weber’s family received the letter with his records from the NPRC.

Harry Weber was born on July 11, 1917. His mother, Eva, and father, Abraham, immigrated to the United States from Russia. Harry entered the United States Army in January 1943, at the age of 25 during World War II. Ten months after entering the Army, he married Edith Chizefsky. After returning to the United States, Harry Weber worked as a salesman and a librarian. He and Edith had three daughters. Weber is buried at the Florida National Cemetery in Bushnell, Florida.

Originally created by Pierre B.

Copyright to this resource is held by Harry Weber family. RICHES received permission to reproduce the image. 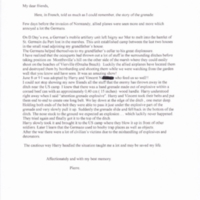