The Report of Changes listing the Navy personnel for the Naval Aviation Cadet Selection Board in Seattle, Washington, in June 1943. The current location saw the personnel at the United States Receiving Station, United States Naval Training and Distribution Center (TADCEN) at Camp Elliott in San Diego, California. The form includes the names and ranks of the personnel.

A notable person listed in the report is Raymond D. Nelson. Nelson was born to Danish immigrants in Brooklyn, Iowa, on August 9, 1920. On December 27, 1939, he joined the United States Navy. He reached the rank of Lieutenant Junior Grade by the time he retired on October 3, 1946. He served on the USS MacDonough and USS Birmingham. Nelson is buried at the Florida National Cemetery in Bushnell, Florida. 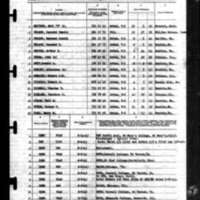