Black and white photograph of the USS MacDounough (DD-351). The USS Macdonough (DD-351) was a Farragut-class destroyer in the United States Navy during World War II. The MacDounough downed a Japanese attack plane during the attack on Pearl Harbor in December 1941. Raymond D. Nelson served on the ship for part of his tenure in the United States Navy. Nelson was born to Danish immigrants in Brooklyn, Iowa, on August 9, 1920. On December 27, 1939, he joined the United States Navy. He reached the rank of Lieutenant Junior Grade by the time he retired on October 3, 1946. He served on the USS MacDonough and USS Birmingham. Nelson is buried at the Florida National Cemetery in Bushnell, Florida. 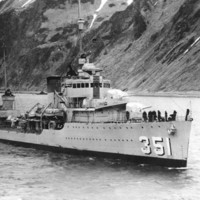