A newspaper article published in The Portsmouth Times (Portsmouth, Ohio) on May 7, 1943. The article reports on local men and women serving in the United States military.

A notable person listed is Denver Purtee. Born in Scioto, Ohio, on November 22, 1925, Purtee joined the United States Navy at 17 years old on December 4, 1942. He trained as a diesel operator in Chicago before being assigned to the USS Wyandot (AKA-92). When he retired from the Navy, Denver Purtee had reached the rank of Engineman Chief Petty Office. On June 17, 1948, he married Evelyn Irene George in Washington D.C. He passed away on November 15, 1991, and is buried at the Florida National Cemetery in Bushnell, Florida.

Copyright to this resource is held by The Portsmouth Times (Portsmouth, Ohio) and is provided here by RICHES for educational purposes only. 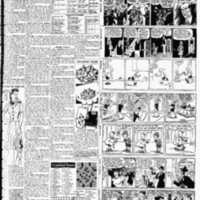