The Florida State Population Census for Haines City, Bradford County, Florida, for 1935. The census divides the population by address, age, gender, race, relationship to head of house, place of birth, occupation, education, and whether they owned or rented their property. State censuses were compiled in 1845 and every ten years after, and were abolished in 1949.

A notable individual listed in this record is Major James Lamarr Moore (1923-1994). Major Moore was born to Raymond R. Moore and Nettie Mae Moore on December 14, 1923, in Oxford, Alabama. Moore enlisted in the United States Army on January 1, 1923, to serve in World War II. At the time, he worked for the Great Atlantic Pacific Tea Company in Haines City, Florida. His military career spanned two decades, serving in World War II and the Korean War, and he ended his service as a Major. As a civilian, Moore married Wilma Lorene Rodman in 1942 and had four children. After Wilma’s death, he married Betty Louise Stallings, who had three children of her own. He owned and operated GEICO Insurance offices and was also a partner in the Fed Chek organization, where he served as Vice President. He died from heart failure of June 26, 1994, and is interned at Florida National Cemetery in Bushnell, Florida.

Digital reproduction of original census record by the Florida Department of State, 1935.

Originally created and published by the Florida Department of State. 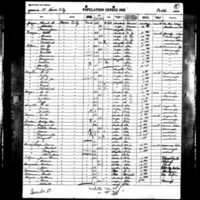