The Eighth Census Population for Williamsburg, Whitley County, Kentucky, for 1860. The census divides the population by dwelling, name, age, sex, color, profession/occupation, value of real estate, value of personal estate, place of birth, martial status, schooling status, literacy, and whether the individual is dead, dumb, blind, insane, idiotic, pauper, or a convict. Much of the information has faded with time, but some important details are still legible.

A notable resident listed in this record is Thomas Buchanan. Buchanan was born on January 21, 1823, in Williamson County, Tennessee. Buchanan eventually moved to Kentucky, married Letty Greene on November 5, 1846, and fathered six children with her. According to a letter to his parents, Buchanan may have been a member of the Kentucky Home Guard in 1861, as he fought off secessionists. Later, when Kentucky’s neutrality was violated by the Confederacy, Buchanan was mustered into the 7th Kentucky Infantry U.S. He fought in a number of battles, including the Siege of Vicksburg, where he was mortally wounded. Buchanan passed away in a Union hospital a few weeks later. His widow, Letty, went on to collect his pension until 1916. She passed away in 1936. Thomas Buchanan is buried in the Florida National Cemetery in Bushnell. 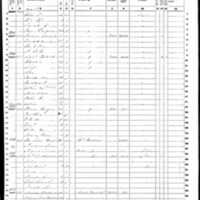