A page from the Logansport High School Yearbook in Logansport, Indiana, in 1935. The page contains images of the graduating seniors with their names listed along the right hand side in addition to a small statement about each student.

A notable student listed is Edward Patrick Conners (1916 – 1995). Conners was born on March 17, 1916, in East Chicago, Indiana. He played football for Logansport High School and graduated in 1935. After graduation, he worked as a lineman for a telephone company in Indiana. At the outbreak of World War II, Conners entered the United States Army Signal Corp on February 26, 1941. He served in this capacity until November 15, 1947. He reenlisted six days later and stayed in the military until June 30, 1964. After his service, Conners moved to Atlantic Beach, Florida. He died on September 1, 1995, in Alachua County, Florida. He is buried in Florida National Cemetery in Bushnell. 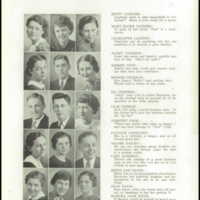