The manifest of the in-bound passenger list for the ship General Maurice Rose. The ship sailed from Southampton, England, to New York, New York, in May 1955. Joan V. Harris, wife of Homer Duke Harris, and their daughter are listed as passengers.

A notable individual listed is Homer Duke Davis. Born in Nashville, Tennessee, on January 30, 1928, David enlisted in the United States Army in April 1946 at Fort Oglethorpe, Georgia, and was assigned to the Panama Canal Department. He was released in October 1947. He reenlisted in August 1950, and served until 1955, when he returned to Nashville and worked as a salesman. He married Joan V. Fairhall in 1953, in Surrey, England. They had at least two children. Harris died on December 18, 1996, and is buried in Florida National Cemetery in Bushnell.

Originally created and published by the United States Immigration and Naturalization Service. 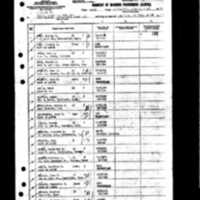