The draft registration card for Archie Hawkins (1902 – 1989). The card contains the demographic information for the soldier including name, age, home address, date of birth, place of birth, race, citizenship, father's birthplace, name and place of employment, name and address of nearest relative, race, whether tall, medium or short, eye and hair color, and if the person is physically disqualified. World War I draft registration cards were completed by approximately 24 million men living in the U.S. in 1917 and 1918.

Hawkins was born in Lloyd, Florida, to Doc and Lilly Hawkins, on February 12, 1902. He registered for the draft twice. Both times, Hawkins claimed that he was older than he actually was. On his second attempt, he was accepted and drafted into the United States Army on September 26, 1918. He served domestically at Camp Joseph E. Johnson in Jacksonville, Florida, as a part of the Auxiliary Remount Depot no. 333. After Hawkins’s service ended on December 14, 1918, he returned home to Lloyd. He moved to St. Petersburg, Florida, in 1929. Archie Hawkins died on February 27, 1989, in Pinellas County, Florida. He is buried in Florida National Cemetery in Bushnell. 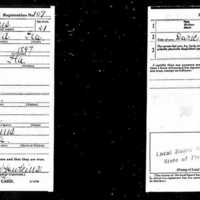