A notable soldier in this segregated unit is Archie Hawkins (1902 – 1989). Hawkins was born in Lloyd, Florida, to Doc and Lilly Hawkins, on February 12, 1902. He registered for the draft twice. Both times, Hawkins claimed that he was older than he actually was. On his second attempt, he was accepted and drafted into the United States Army on September 26, 1918. He served domestically at Camp Joseph E. Johnson in Jacksonville, Florida, as a part of the Auxiliary Remount Depot no. 333. After Hawkins’s service ended on December 14, 1918, he returned home to Lloyd. He moved to St. Petersburg, Florida, in 1929. Archie Hawkins died on February 27, 1989, in Pinellas County, Florida. He is buried in Florida National Cemetery in Bushnell.

Copyright to this resource is held by Greg Krenzelok and Robert Phillips and is provided here by RICHES for educational purposes only. 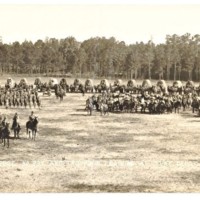