The Fourteenth United States Census records for Cheboygan, Michigan, for 1920. The census divides the population by names of residents at same address, relationship of person enumerated to the head of the family, whether home owned or rented, if owned, whether free or mortgaged, sex, race, age at last birthday, marital status, year of immigration to United States, citizen status and date of naturalization, whether attended school any time since September 1, 1919, literacy, person's place of birth, mother and father's place of birth, mother and father's native tongue, whether able to speak English, profession or work preformed, industry or business of work, whether employer, salary or wage worker, or working on own account, and number of farm schedule.

A notable resident listed in this record is James George Jackson (1916-2006). Born on May 22, 1916, in Cheboygan, Michigan, Jackson enlisted in the United States Army Air Corps on November 1, 1940, at the age of twenty-four. He served at several locations, including the Hawaiian Islands, Solomon Islands and Fiji Islands. Jackson survived the attack on Pearl Harbor on December 7, 1941. After he was honorably discharged in 1945, he enrolled at Wayne State University and the Detroit College of Law in Detroit, Michigan. Between 1949 and 1981, he worked as a management consultant at Employers Insurance of Wausau. He married Genevieve E. LeRoux on September 17, 1949. His wife passed away in 1987, and Jackson remarried Audry Gouine-Clark in1993. Jackson died on June 8, 2006, and is buried in the Florida National Cemetery in Bushnell. 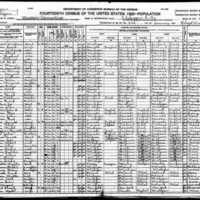