A page from the 1955 City Directory for Lansing, Michigan. The public record served to provide an alphabetical list of citizens by head of household, their address, and relevant occupational information. A spouse’s name is listed next to the head of household. Death dates of those who have been previously listed in the directory, names of employers, and information about migration to other towns are also included.

A notable individual listed is Bryce Lafave, who worked as an inspector at the Oldsmobile Factory in Lansing, Michigan, at the time. Born on November 22, 1920, in Bay City, Michigan, Bryce Lafave served in the United States Army Air Corps during World War II. He enlisted on May 26, 1942, and trained at Chanute Field in Illinois. Lafave married Yvonne Coldsnow in 1942, but they divorced in 1951. He later married Jeannette Louise Smith. Lafave fathered seven daughters between his two marriages. He and his wife moved to Florida by 1992, where he settled in the Tampa Bay area. Lafave died on January 22, 1996, and is buried at Florida National Cemetery in Bushnell.

Originally created and produced by the City of Lansing, Michigan. 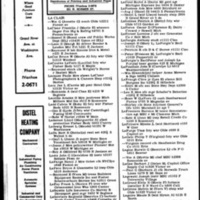