The Fifteenth United States census records for Decantur, Illinois, for 1930. The Census divides the population by categories of
Name, age, sex, race, marital status, occupants and relation to head of house, whether the home is owned or rented, value of home or rent, whether home is a farm residence, whether the home has a radio, college attendance, literacy, birthplace and birthplace of parents, citizenship status, language spoken before coming to United States, year of immigration, occupation or business, class of worker, whether worked the previous day, military status, and war or expedition participated in.

A notable resident listed in this record is Frieda Lambrecht. Born on August 31, 1913, in Gelsencherkin, Germany, Lambrecht immigrated with her family to the United States in 1926, and naturalized in November 1929. She enlisted in the Women’s Army Auxiliary Corps (WAAC) on February 24, 1945, and worked in Army general hospitals. In 1951, while still serving in the WAAC, she married Conrad Lambrecht, a Warrant Office in the United States Army. Lambrecht died on April 4, 1995, and is buried in the Florida National Cemetery in Bushnell. 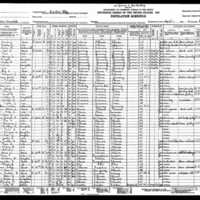