Index of Marriages for California, 1951

Index of Marriages for California, 1951

The index of marriages for California for 1951. A notable person listed in this record is Frieda M. Wond and her husband, Conrad H. Lambrecht. Born on August 31, 1913, in Gelsencherkin, Germany, Lambrecht immigrated with her family to the United States in 1926, and naturalized in November 1929. She enlisted in the Women’s Army Auxiliary Corps (WAAC) on February 24, 1945, and worked in Army general hospitals. In 1951, while still serving in the WAAC, she married Conrad Lambrecht, a Warrant Office in the United States Army. Lambrecht died on April 4, 1995, and is buried in the Florida National Cemetery in Bushnell. 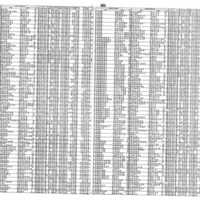