The draft registration card for Charles James McLaren (1891-1988). The card contains the demographic information for the soldier including name, age, home address, date of birth, place of birth, race, citizenship, trade or occupation, number of dependents, whether tall, medium, or short, slender, medium, or stout, eye and hair color, whether bald, and disabilities. World War I draft registration cards were completed by approximately 24 million men living in the U.S. in 1917 and 1918. McLaren registered for the draft on June 5, 1917.

Born on May 17, 1891, in Seattle, Washington, McLaren grew up in Minnesota before moving to Spokane, Washington, to work for the Northern Pacific Railway Company. He spent decades working for the company, eventually becoming a master mechanic. He enlisted in the United States Navy on May 27, 1918, serving as a Machinist’s Mate, First Class. He remained in the Navy until his discharge on September 30, 1921. After the war, he returned to work for the Northern Pacific Railway. He married the former Anne E. Thomas and fathered a daughter, Carol. He later returned to Washington State, living in both Seattle and Spokane during the 1940s and 1950s. Eventually McLaren and his wife moved to Brevard County, Florida. McLaren died on September 20, 1988, and is buried at the Florida National Cemetery in Bushnell. 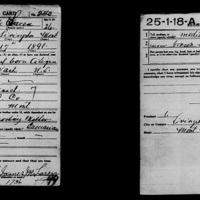