Certificate of Marriage for Willie Roberts and Ruth Plessley

Certificate of Marriage for Willie Roberts and Ruth Plessley

Certificate of Marriage for Roberts and Plessley

Certificate of marriage for Willie Roberts and Ruth Plessley in Bradford County, Florida, on November 10, 1920. An affidavit representative affirms the legitimacy of the marriage between the groom and bride, detailing their age at the time of marriage along with their signatures. The certificate also lists the date of sworn notary and the name and signature of the authorized affidavit representative.

Willie Roberts enlisted in his hometown of Starke, Florida, on April 26, 1918. He served in the United States Reserve Labor Battalion, Quartermaster Corps till his discharge with rank of private on April 11, 1919. Born on March 25, 1892 in Starke, Florida, Willie Roberts spent his entire life in the state of Florida. He served in the United States Army during World War I. After the war, he married Ruth Plessley he had a daughter named Geneve. Roberts worked in the railroad industry, eventually moving to Jacksonville working as a train porter. Roberts died on February 29, 1992, in Lake City, Florida and is buried in the Bushnell National Cemetery in Bushnell.

Digital reproduction of original marriage certificate recorded by the Clerk of the Circuit Court, November 10, 1920.

Originally created and published by the Bureau of Vital Statistics. 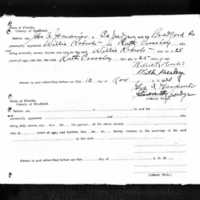