Alexander M. Roberts Returns After and Exciting Time on The Front

A newspaper article published in The Gulfport Daily Herald on February 19, 1919. The article describes the capture of Alexander Roberts by German troops, his subsequent imprisonment and his safe return home.

Born on October 13, 1895 in Mexico City, Mexico, Roberts grew up in both Gulfport, Mississippi, and Havana, Cuba, traveling between the two cities. Roberts enlisted in the aviation branch of the United States Army when the United States entered World War I. His plane was shot down over Belgium and he was captured on his first mission. Roberts worked as a pilot during the interwar years. He was drafted in 1942 and was promoted to Lieutenant Colonel. He served as an official aide and aviation advisor to the United States Army. He died in Tampa, Florida, on July 23, 1988, and is buried at the Florida National Cemetery in Bushnell.

Originally created and published by the Gulfport Daily Herald.

Copyright to this resource is held by the Gulfport Daily Herald and is provided here by RICHES for educational purposes only. 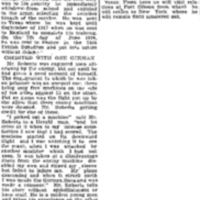