A page from the 1960 City Directory for St. Charles, Illinois. The public record served to provide an alphabetical list of citizens by head of household, their address, and relevant occupational information. A spouse’s name is listed next to the head of household. Names of employers and information about migration to other towns are also included.

A notable resident listed is Jerry Bumgarner (1935-1983). Born on November 8, 1935, in St. Charles, Illinois, Bumgarner was an active member of the high school C Club, track, and football teams. On June 25, 1954, he enlisted in the United States Marine Corps at nineteen years old. He served in the 7th Engineer Battalion and retired on June 24, 1956, reaching the rank of E2, Private First Class. He married Janice M. Colegrove and the couple lived in St. Charles until they moved to Clearwater, Florida. Bumgarner passed away on March 1, 1983.

Originally created and published by the City of St. Charles, Illinois . 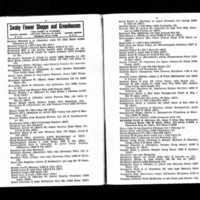