Stephen Edward Cousens wearing his United States Navy uniform. Born in New York City in 1948, Cousens served as a Communications Yeomen during the Vietnam War from January 1966 to March 1969. He later settled in Long Beach, California. Cousens passed away in February of 1997, and a memorial marker at the Florida National Cemetery in Bushnell, Florida, commemorates his life and service. His father, Robert Douglass Cousens, who served in World War II, is also buried at the cemetery with his wife and Steven's mother.

Copyright to this resource is held by Natasha Cousens and is provided here by RICHES for educational purposes only. 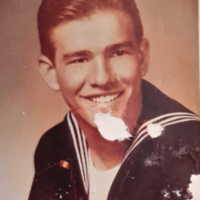