The Korean War Unknown Soldier joins the two candidates from World War II aboard the USS Canberra. The Tomb of the Unknowns, which is also known as the Tomb of the Unknown Soldier, is a monument dedicated to United States service members who have died without their remains being identified. As the only active-duty Navy enlisted recipient of the Medal of Honor in 1958, William R. Charette was granted the final decision in selecting which particular Unknown Soldier from World War II would be interned at the Arlington National Cemetery tomb in Washington D.C.

William R. Charette was born on March 29, 1932, and enlisted in the United States Navy on January 10, 1951. He was assigned to the 7th Marine Infantry Regiment of the Fleet Marine Forces Pacific, where he was deployed to the Korean Peninsula. He was nominated for the Navy Cross for conspicuous gallantry and intrepidity at the risk of his life above and beyond the call of duty in action against enemy aggressor forces, repeatedly exposing himself to enemy fire, sustaining multiple injuries, and evacuating and treating numerous members of his and adjacent friendly forces. His award was later upgraded to the Medal of Honor and presented to him by President Eisenhower at a ceremony held in the Oval Office on January 12, 1954. Charette’s later career was spent in the Submarine and Hospital services, including service aboard the USS Quillback, USS Triton, USS Daniel Webster and USS Simon Bolivar. He began living in Florida while stationed at the Orlando Naval Hospital and Orlando Recruit Dispensary. He retired to Lake Whales, Florida in 1977 after 26 years of service, and passed away on March 18, 2012. He was preceded in death by one son, and succeeded by three daughters, and one son. On March 22, 2012, Charette was buried in with his son in Florida National Cemetery in Bushnell, Florida. His wife of fifty-eight years, Louise Fraiser Charette, passed away on March 26, 2016 at the age of 81 and joined the two at their burial site.

Originally created by the United States Navy and published by the Naval Historical Center. 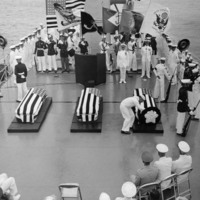