A newspaper article published in The Tennessean, on December 9, 1928. The article describes a mail plane that was crashed by Eugene Fricks. Although the plane hit a stump, Fricks escaped the incident with only a small laceration to the face and everyone onboard survived.

Eugene Fricks was born on March 26, 1893. His father, William Barto Fricks, was from Georgia and his mother, Mattie Jacquess, was from Kentucky. From the 1920s to the 1930s, Eugene was married to his first wife, Ethel where they had three children named Harley, Imogene, and Mattie. The 1940 census records his marriage to his second wife, Grace, with whom he had two children named Janette and Joseph. He served in World War I. After his service, he had a career in aviation. Later, he retired from Pan-American Airways in 1961 and lived his remaining years in North Fort Myers. He died on May 23, 1976 and is buried in the Florida National Cemetery.

Originally published by The Tennessean.

Copyright to this resource is held by The Tennessean and is provided here by RICHES for educational purposes only. 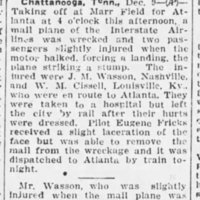