The Eighth United States Census records for Sumterville, Sumter County, Florida, for 1860. The census divides the population by name, age, sex, color, birthplace, occupation of males over age fifteen, the value of real estate and personal estate, if married within the year, if attended school within the year, persons over the age of 20 who cannot read and write, and whether deaf and dumb, blind, insane, idiotic, pauper or convict.

A notable resident listed is William Stephen Fussell (1837 – 1862). Born on December 20, 1837, in Telfair, Georgia, Fussell's parents were both from North Carolina. He moved to Florida some time before 1850, and first entered military service in 1856, when he joined Bullock’s Company, Florida Mounted Volunteers during the Third Seminole War. After the war, Fussell settled down in Sumter County, and married Elizabeth Ann Matchett on February 15, 1859. When Florida seceded from the Union in 1861, Fussell joined the Confederate Army, enlisting in Company F of the 7th Florida Infantry Regiment. While in this regiment, Fussell died of disease in Knoxville, Tennessee, on November 5, 1862. He is memorialized at Florida National Cemetery in Bushnell, Florida. 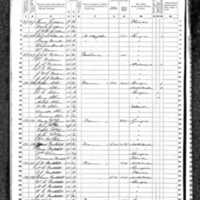