Handwritten compiled military service records for volunteer soldiers who served in organizations from the State of Florida during the Florida Indian Wars from 1835-1858. The document records the soldier's name, unit served, length of service, war served, rank and indexed card numbers. The veteran listed in the document is William Stephen Fussell, (1837 – 1862). Born on December 20, 1837, in Telfair, Georgia, Fussell's parents were both from North Carolina. He moved to Florida some time before 1850, and first entered military service in 1856, when he joined Bullock’s Company, Florida Mounted Volunteers during the Third Seminole War. After the war, Fussell settled down in Sumter County, and married Elizabeth Ann Matchett on February 15, 1859. When Florida seceded from the Union in 1861, Fussell joined the Confederate Army, enlisting in Company F of the 7th Florida Infantry Regiment. While in this regiment, Fussell died of disease in Knoxville, Tennessee, on November 5, 1862. He is memorialized at Florida National Cemetery in Bushnell, Florida. 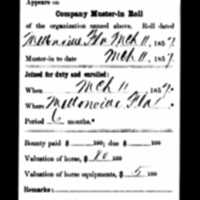