A newspaper article published in The Hartford Courant, on September 19, 1963. The article describes a dozen employees of the New Departure Division of General Motors reaching their 25 years of service. The workers' length of service qualified them for engraved watches or clocks.

Originally created and produced by The Hartford Courant.

Copyright to this resource is held by The Hartford Courant and is provided here by RICHES for educational purposes only. 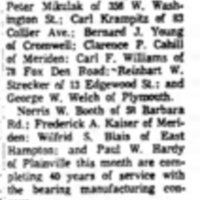