Entry for Walls of the Missing at Manila American Military Cemetery, Philippines

Document providing information about Arthur Joseph Holmes (1923-1942), one of the soldiers memorialized on the Wall of the Missing at the Manila American Cemetery and Memorial in Fort Bonifacio, Metro Manila, within the boundaries of the former Fort William McKinley, in the Philippines. The cemetery contains the largest number of graves of deceased American soldiers from World War II. On rectangular Trani limestone piers within the hemicycles, are inscribed the Tablets of the Missing, containing 36,286 names.

Born in New York on December 11, 1923, Arthur Joseph Holmes enlisted in the United States Marine Corps on January 26, 1942, not two months after the Japanese attack on Pearl Harbor. By April of 1942, Holmes joined Company C, First Battalion, First Marines, First Marine Division, Fleet Marine Force, which was an infantry division stationed in New River, North Carolina. In October of 1942, the company performed duties in the Guadalcanal war zone and engaged in the Battle of Tenaru. Holmes transferred to Company E, Second Battalion, First Marines, First Marine Division, Fleet Marine Force, in July of 1943. He was stationed at Camp Rowville in Dandenong, Victoria, Australia. His unit participated in the push for Huon Peninsula, Operation Cartwheel at Rabaul, the Battle of Cape Gloucester, as well as the battles for the Solomon and Palau Islands. Private First Class Holmes lost his life while participating in the Battle of Peleliu on September 14, 1944. He was buried at sea and is memorialized in the Manila American Cemetery in Taguig, Philippines. Holmes is also memorialized at the Florida National Cemetery in Bushnell, Florida.

Originally created and published by the American Battle Monuments Commission. 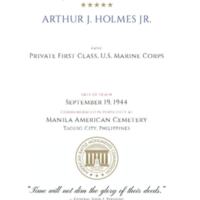