The First Marine Division shoulder patch, originally authorized to be worn by members of units who served with or were attached to the Division in the Pacific during World War II. The patch was the first to be approved in that war and specifically commemorated the division's victory in the Battle for Guadalcanal. The white stars featured on the night-sky blue background are in the arrangement of the Southern Cross constellation, under which the Guadalcanal fighting took place.

A notable soldier who wore the patch was Arthur Joseph Holmes (1923-1942). Born in New York on December 11, 1923, Holmes enlisted in the United States Marine Corps on January 26, 1942, not two months after the Japanese attack on Pearl Harbor. By April of 1942, Holmes joined Company C, First Battalion, First Marines, First Marine Division, Fleet Marine Force, which was an infantry division stationed in New River, North Carolina. In October of 1942, the company performed duties in the Guadalcanal war zone and engaged in the Battle of Tenaru. Holmes transferred to Company E, Second Battalion, First Marines, First Marine Division, Fleet Marine Force, in July of 1943. He was stationed at Camp Rowville in Dandenong, Victoria, Australia. His unit participated in the push for Huon Peninsula, Operation Cartwheel at Rabaul, the Battle of Cape Gloucester, as well as the battles for the Solomon and Palau Islands. Private First Class Holmes lost his life while participating in the Battle of Peleliu on September 14, 1944. He was buried at sea and is memorialized in the Manila American Cemetery in Taguig, Philippines. Holmes is also memorialized at the Florida National Cemetery in Bushnell, Florida. 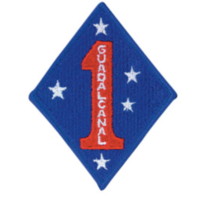