The abstract of World War I military service for Amasa Edward Hoyt Jr. The document includes Hoyt's name, Army serial number, race, residence, where he enlisted, place of birth, birth date or age, organizations served in, grades, engagements, wounds, time served overseas, discharge and reason for discharge, any disability acquired during service, and any other remarks. On the back, the continued remarks note that due to an act of Congress in 1936, Hoyt’s discharge status was changed to an honorable discharge. Hoyt was discharged for lying about his age on the form.

Born on April 7, 1903, in Binghamton, New York, Hoyt enlisted in the United States Army on May 13, 1918, at the age of fifteen. He was discharged on August 31, 1918, when the Army discovered that he lied on his enlistment form. This dishonorable discharge would have made it impossible for Hoyt to be buried at Florida National Cemetery. However, an Act of Congress on March 3, 1936, upheld that soldiers who sought to serve before the legal age be “considered to have been honorably discharged,” recognizing their desire to serve their nation during wartime. Hoyt later served in World War II as a second lieutenant, and his unit occupied Berlin during the post-war period. He was eventually appointed as a postmaster for Florida by President John F. Kennedy. Hoyt passed away on November 22, 1989, and is buried in Florida National Cemetery in Bushnell.

Originally created and published by the Adjutant General’s Office. 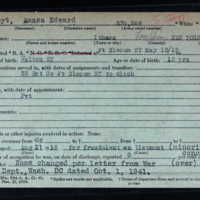 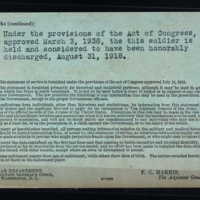